"Here Comes Everybody" - by Clay Shirky 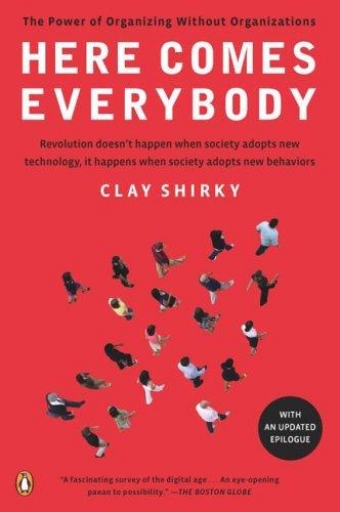 Clay Shirky explains what the Power of Everybody means in his book titled, "Here Comes Everybody".  How social media lowers barriers and opens up opportunities for improved communities

Social Media lowers barriers and opens the strength of communities

, reminds us that being social is not a choice, but a primal instinct in all of us.  Our human society is made up of a complex network of individuals and their constituent groups that are constantly communicating with each other to achieve great results. “Group action gives human society its particular character, and anything that changes the way groups get things done will affect society as a whole”.  Social media has made changes in our society by introducing to us a new way of communicating and a new way of organizing that has never been done before.  Shirky talks about the social media tools available, how they are being used, how hierarchical organizations have to adapt and what this will mean for all of us as we move into the future.

Social media tools offer the flexibility for us to create more groups by lowering barriers.

Some barriers that have been lowered with the introduction of internet and social media tools are:

When something is introduced it is first considered new, then normal, next it becomes ubiquitous and then finally invisible.  It is at the state of invisibility that it becomes the most effective, because then behaviour is changed.  We have not reached that time yet with social media.  “It’s when a technology becomes normal, then ubiquitous, and finally so pervasive as to be invisible, that the really profound changes happen” and it is my opinion that only then can marketers utilize these tools with the greatest effect.

Clay Shirky was born in 1964.  He is considered a subject matter expert on the Internet and its effect on our society and culture.  He is a writer, speaker, consultant and a professor at New York University (NYU). Laura Dunkley is a communications strategist with expertise in business development, digital marketing, and public relations.

5 ways Communications can increase the Value of your Business.

Improving your communications is an investment in your business. Good communication supports employee satisfaction, key stakeholder relationships, brand reputation, productivity, and a company's competitive advantage, which are all factors in building a valuable company.

How to create a LinkedIn Profile Video

LinkedIn gives you an opportunity to create a cover video to introduce yourself and is added to your profile image. When someone clicks on that image, the video will play.  The video must be at least 3 seconds long and cannot exceed 30 seconds. You need to add or edit the video through your mobile app. However, you can play the video through the desktop version.

Sign up to receive the latest news, trends, and best practices in business communications delivered right to your inbox.

By subscribing to this email list you consent to receive emails from Laura Dunkley, L. Dunkley Communications on the topic of communications and related information. You can safely unsubscribe at any time. Contact information.  View Privacy Statement

Do you need marketing and communications support?

Laura works with the team at Acorn Studio Marketing & Co. to help entrepreneurs and business leaders leverage digital technology and communications best practices to build their brands and businesses.